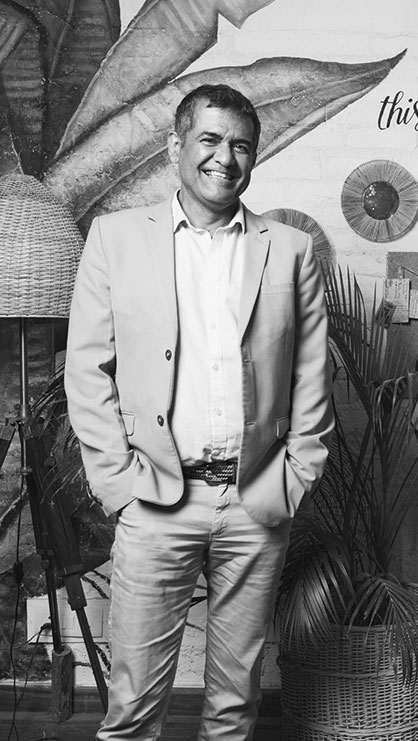 A well-known figure in the restaurant business, AD Singh has been at the forefront of the Indian hospitality industry for the last 28 years. Since 1990 he has encouraged the growth of the ‘standalone’ restaurant concept in India, giving it direction, confidence, leadership and definition.

Born in Delhi in 1960, AD moved to Mumbai at a young age, attending the well-known Cathedral and John Connon School. Soon after college, a scholarship at Lafayette took him to Pennsylvania to earn a degree that got him into the blue-chip companies TCS and Cadbury’s on his return to India.

But AD wanted more. He discarded his suit and tie to spend a year with various NGOs, and wrote a weekly food column for The Metropolis - a part of The Times Group – in the 1990s. It was only in 1988 that he found his true calling when he organised a party on a barge to celebrate his sister's wedding. The party was a huge success, and AD set up his first F&B venture, a boat party planning service he called Party Lines.

AD’s emphasis on hard work, great design, innovation, investment in people, service and product quality, and customer delight, has been the trademark of his success. Well-spoken, kind, and inquisitive, AD Singh has always understood the importance of building long-standing relationships with his partners. He has provided a professional platform to many of his protégés and chefs, launching them to become the industry’s next rising stars. Their achievements are a testament to his own success as a nurturer of brands and people.

AD has always launched sharply detailed and carefully conceptualised restaurants. His limitations in formal training and financial backing led him to rely heavily on creativity, ideas, and his gut when it came to building his brands.

AD made his restaurant business debut in 1990 with Just Desserts, a jazz café that served only coffee and desserts. Immensely successful and filling a huge void in the casual dining space, the restaurant was described by India Today as the ‘phenomenon of the nineties’.

In the year 2000, Union Park in Bandra was a sleepy neighbourhood, except for a somewhat persistent hammering behind closed blue doors. When AD opened Olive, he changed the way that Bombay perceived the suburbs, and introduced the city to Mediterranean cuisine, complete with a lazy and timeless dining experience.

In 2003, AD opened The Olive Bar and Kitchen in New Delhi, which was honoured among the ‘best new restaurants in the world’ by Condé Nast Traveler. Soon, Olive became one of the most popular and best-loved restaurant brands in the country, winning numerous awards and accolades across Mumbai, Delhi and Bengaluru – where, in 2005, AD opened Olive Beach in a quaint bungalow.

In 2018, the much awaited (for 17 years) Olive Bar and Kitchen launched in an alfresco space situated on the stunning Vagator beach of North Goa, with a casual, rustic ambience of signature all-white walls overlooking the Arabian Sea.

Olive Bistro embodies the spirit of Olive in a more affordable and casual avatar. In 2013, Olive Bistro opened in Hyderabad, and two years later in Goregaon, Mumbai.

Almost two decades later, Olive has become legendary in restaurant circles; and despite a voracious reading habit, a fondness for jazz and sports, and a love for the finer things in life, AD has launched 15 restaurant brands throughout the country. He is credited with many ‘firsts’ in the Indian restaurant scene. Bombay’s first floating bar - Suzy Wong, India’s first gastropub - Monkey Bar, Olive - the country’s first truly standalone restaurant, and Guppy - one of India’s first Japanese restaurants.

Other notable names under the Olive umbrella are Lady Baga - the Goan Beach Shack in Mumbai, The Grammar Room - an all-day cafe borne out of a mutual love for grammar, food and coffee, The Fatty Bao - an Asian gastro-bar, and the East Village, NYC inspired and gastronomically curious - Toast and Tonic. 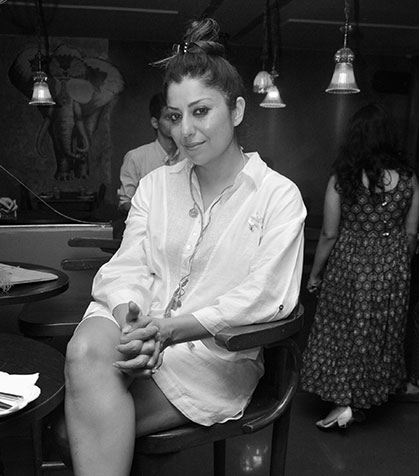 Every restaurant of the Olive Group is known for its unique design, and Ms. Sabina Singh is the creative mind behind it all, powering the brand’s success. Sabina imbibes each restaurant with its own thematic soul, influencing its vibe and personality. Preferring the hands-on approach, she works closely with architects to bring her concepts to life. Sabina derives a lot of inspiration from her travels across the world and is constantly evolving her aesthetic philosophy.

Most recently, together with Interior and Product Designer Shweta Kaushik, Sabina was instrumental in refreshing the decor and design of Olive Bar & Kitchen for its 17th anniversary. She installed a full kitchen garden, created a pickle bar where the Chef could interact with customers, and entirely revamped the bar and surrounding space, making it more relevant to current audiences. All while maintaining Olive Bar & Kitchen's familiar and comfortable boho-chic vibe.

For SodaBottleOpenerWala – a Bombay Irani café & bar, Sabina was tasked with re-creating and preserving the fading charm of an iconic culture.

Delving deep into the unique world of the Irani café and its nuances, Sabina worked with Architect Clement DeSylva to manifest her ideas into reality. Today, SodaBottleOpenerWala is one of the most successful concept restaurants in the country.

Perched atop a cliff, overlooking the gorgeous Vagator beach, Olive's latest avatar blends in with the blissful vibe of the scenic landscape. Sabina's vision for Olive Bar and Kitchen, Goa was to create an alfresco space with the casual, rustic ambience of signature all-white walls, in perfect harmony with the cliffs, the crashing waves, and the deep blue sea.

Sabina also designed The Grammar Room - an all-day cafe borne out of a mutual love for grammar, food and coffee. A beautiful space that extends into the rich foliage of the Delhi Ridge Forest, The Grammar Room features large glass windows, printed tiles and upholstery, and upcycled furniture juxtaposed with cane, wicker and marble top accents, with Edison lights and iPods mounted on the walls.

While designing a restaurant, Sabina feels it is important that the customers connect with the product at an emotional level. She prefers to mix contemporary and vintage elements to create something truly nostalgic, memorable and wonderful. 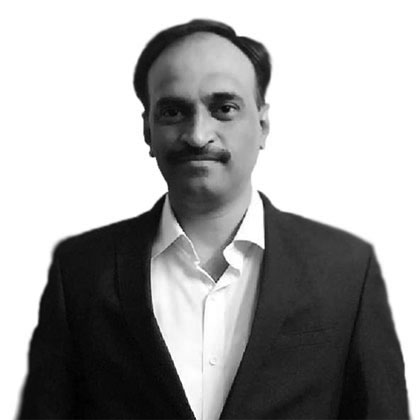 Viraj Churi, Olive Group’s CFO, has been a part of the Olive Group family since its inception in 2000. An alumnus of the Mumbai University, he went on to do an MBA from Sikkim Manipal University, a Diploma in Law & Taxation from Mumbai University and a Diploma in Sanitary Inspector from All India Institute of Local Self-Government. The man with the chequebook, Viraj has been integral to the Group’s growth. He’s a star! 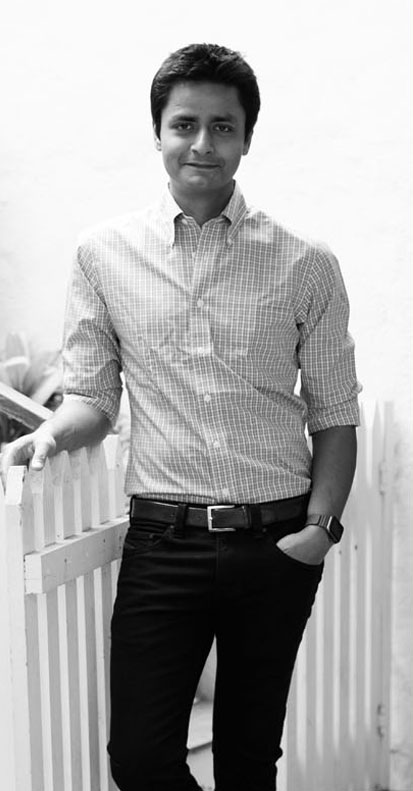 Manu’s passion for food surfaced at a young age, wielding the ladle since the age of 12, thanks largely to a foodie family.

After school, it was culinary school - one that rewarded innovation and fresh thinking, that allowed him to develop a completely original perspective on everything. While at St. Stephen’s College, Manu wrote, designed, and helped photograph a book on fusion cuisine.

The Culinary Institute of America (CIA) Hyde Park, New York, called him away from home, and he apprenticed with some of the City’s most celebrated kitchens; opening the now legendary Mandarin Oriental Hotel in Manhattan. Armed with top honours from CIA and a prestigious Sea Food Masters Award for the National Recipe Competition in 2002, he travelled to Norway to work with the Michelin starred Chef Eyvind Hellstrom at Bagatelle, well before Nordic cuisine was even acknowledged globally.

A lover of slow cooking, a process that enables one to extract flavours and textures. On the flip side, he’s also fond of incredibly fast cooking, which keeps the integrity of ingredients and freshness intact.

Featured on India Today’s list of Young Achievers, Manu received accolades and appreciation from around the world as one of the most promising and talented young chefs in India, namely in the New York Times and Time Magazine. He’s also featured on the Elle Magazine Hot List; and was selected by GQ India magazine as one of the 50 Most Influential Young Indians for 2015 and again in 2016. Manu’s been selected by Fortune India magazine’s‘40 under 40, Class of 2016’, an exclusive list of India’s finest young business leaders. He has also written extensively on food and food trends for a cross section of publications including Forbes, Mint Lounge, BBC Good Food, The Week, India Today, Yahoo.com and The Times of India. More recently, Manu appeared on Masterchef India, and curated the Zee Food Awards. 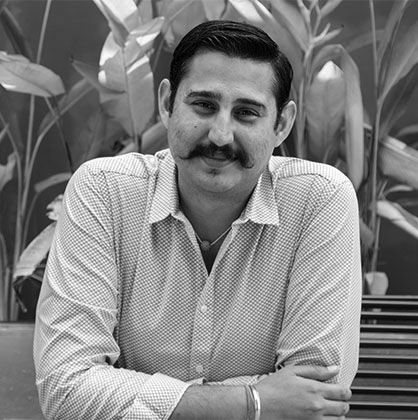 Chetan Rampal joined the Olive Group in 2011, fresh out of college with a Diploma in Hotel Management & Catering Technology in his hand. A man who lead by example, he was made responsible for Olive Bar & Kitchen, Mumbai’s operations early in his career. Under his leadership, the flagship restaurant achieved a number of awards and accolades, including Best Resto Bar by Times Food Guide, almost every year till 2011. Chetan’s talent for ideation and a thorough knowledge of the business has made him an integral part of most of Olive’s opening teams. 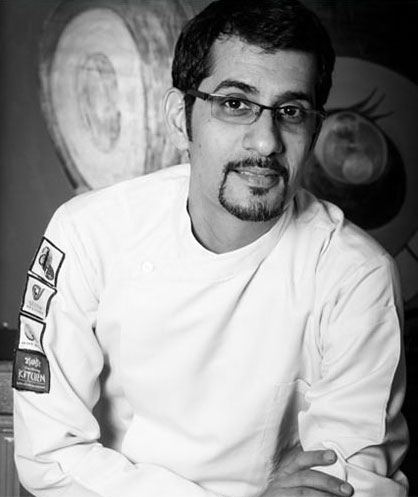 Chef Vikram Khatri’s quite the ninja in the kitchen. In 1999, he joined India’s first Japanese restaurant Sakura at the Metropolitan Hotel, New Delhi, where he spent seven years learning the craft, nuances, and technique behind Japan’s most famous dishes.

Fresh off the Sukara boat, he came aboard the Olive Group as a core team member for ai. After a short stint at the modern Japanese restaurant Ocean Room in Sydney, ai called him back home.

Chef VK, as he is fondly called, is fiercely devoted to freshness, hygiene and technique. With Guppy, he explores Japan’s bold striking flavours; infusing spice, tang, and the exotic all in one bite. And at Hello Guppy, he’s given Japanese food a light-hearted touch.

Leading the team that has brought many awards and accolades, including Best Japanese Restaurant, Best Sushi Chef, and Top 100 Dishes of Delhi, Chef VK was named International Chef of the Year at the 7th International Chef's Award in 2010. 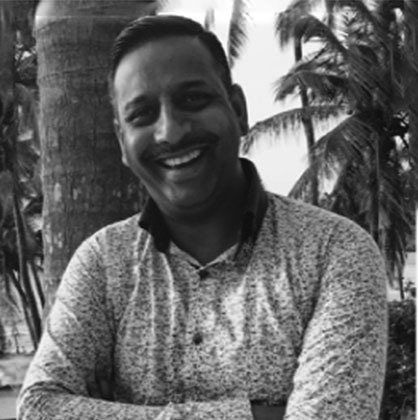 A post graduate in Hotel Management & Catering Technology, Ashwin D’souza joined Olive Mumbai in 2003 with a decade’s worth of F&B experience under his belt. His rare combination of creativity and the ability to run multiple operations across the country at one go earned him the title of Assistant Vice President, Operations.

From an army family, Priyanka spent much of her life on the move before setting down her roots besides the gorgeous banyan tree at Olive Qutub, a post-graduation in Communication Management in her hand.

Working her way up from Marketing Manager at Olive Qutub, Priyanka now handles marketing and event for the Olive Group’s many restaurant pan India. Her biggest goal: to have a hand in growing Olive to the most recognised and awarded national brand.